Encryption, once you have a safe and well-implemented algorithm, is all about the keys. Lose control of your keys, and it’s “Game over, man!” What if we could put our keys somewhere completely out of reach, where even their owner can’t get to them? Yibikeys and HSMs can provide that security, but they’re external devices. However, recent iOS devices and MacBook Pros have something just as good: the Secure Enclave (SE).

Fortunately, using the Secure Enclave for encryption is super well documented. No, wait, it’s hardly documented at all. Trail of Bits encountered this with Tidas, and I recently plunged into the same abyss.

Some demonstration libraries are available on GitHub, but they’re all self-contained. I wanted to generate a message somewhere else, and then decrypt it in the SE. But nothing I found addressed cross-system interoperability.

This led to a long and frustrating detective story. I looked for official docs. Pored over Apple header files and source code. Investigated other example projects, read ECIES papers, and ran down several blind alleys. And of course, I made plenty of stupid mistakes along the way. But I’ll cut to the chase: I eventually figured it out, though it doesn’t quite match the formal specifications. And now, I’ll show exactly how it all works.

Let me back up a little and explain exactly what I’m trying to achieve. Current MacBook Pros and iOS devices (those with Touch ID and, as I’d forgotten, Face ID) include a Secure Enclave. The Secure Enclave is a separate computer, used for high-security features like TouchID. It comes with its own encrypted firmware, memory, and storage, and hardware-based encryption. Programs talk to the SE through a “mailbox” system, rather than a direct connection. The application places data and commands in a specific memory location, then asks the SE to execute the command. The SE then returns results in the same way.

Large quantities of data are usually encrypted using a symmetric key. Symmetric algorithms are fast, efficient, and can handled by dedicated hardware. But it uses the same key for encryption and decryption, which means it the Secure Enclave can’t store it. Asymmetric encryption solves this problem, but with a cost: It’s much slower. So in practice, most systems making use of public key encryption use a hybrid approach.

According to Apple’s documentation, the algorithm used for Symmetric Encryption with the Secure Enclave is called:

which refers to an ECIES standard algorithm. The details are a little arcane, but that’s exactly why we’re here. Let’s take this ugly string one part at a time:

The actual process that takes place is what took some digging to understand. It’s slightly different from the EICES standards, and even from Apple’s published code. Simplified, it works like this: 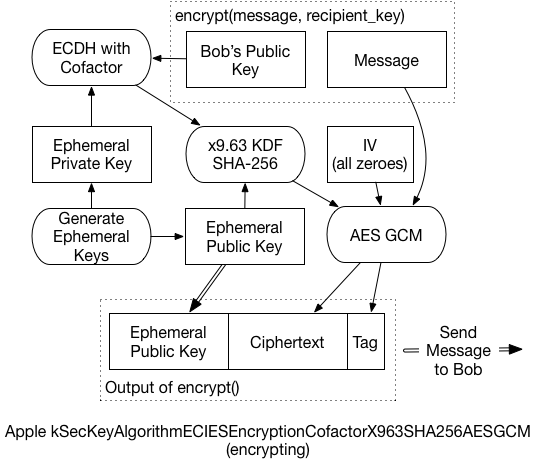 To decrypt the message, the recipient must:

Because the SE communicates in small chunks of data, it could take a while to decrypt a large message. So, that last bit is probably handled by the application processor, and not the SE. That is, the SE would return the final key, and application code decrypts the message. (I didn’t dig enough into this to know for certain, but it seems a reasonable assumption). 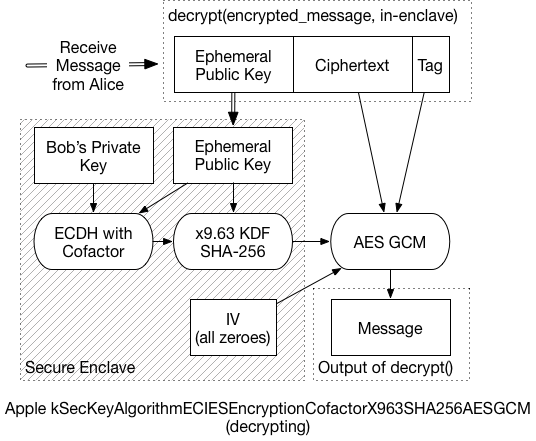 As mentioned before, this Implementation var slightly from the expected standard:

Yet, it’s hard to completely fault Apple for straying from the vast array of choices in ECIES. In A Survey of the Elliptic Curve Integrated Encryption Scheme, the authors conclude:

So, it seems unlikely that we’ll ever see any broadly interoperable ECIES implementations. Given that, cherry-picking the best components to create a similar system isn’t much of a stretch. A later paper from the same authors reaches similar conclusions.

The curve generated by the SE in the demo application is a “prime256v1” curve, also known as “SecP256R1”. By reviewing keychain/SecKey.h, I was able to learn some of the deeper technical details. One such detail is the fact that this algorithm I’m spending so much time discussing is now considered “legacy” and shouldn’t be used for new code:

This comment also indicates that the AES-GCM uses the “static public key data” (the recipient’s public key) as additional authentication data (AAD). But it doesn’t work if you include that. So the docs are wrong, or the implementation is broken…or both.

For the preferred “VariableIV” algorithm, the KDF generates the IV, as well as the key. Instead of deriving 16 bytes, the KDF returns 32 bytes: The first 16 are the 128-bit AES key, the following 16 are the IV. For a curve that’s larger than 256 bits, you’d derive 48 bytes – 32 bytes of key material, then 16 bytes of IV. This VariableIV algorithm also does not appear to use AAD.

The KDF itself is actually less of a black box than I’d initially thought. It’s simply a hash of three concatenated values: sha-256( { shared_key } + counter + { shared_info} ):

None of this would’ve been possible if I hadn’t found some library to help me with the various primitives. The x9.63 KDF is pretty simple, but I needed to find the ECDH function, and AES-GCM. The last isn’t as widely available in popular python cryptography libraries.

I’m making use of the “hazmat” primitives available in the pyca/cryptography library. I also used PyCryptodome to verify the GCM output. For fun, I replicated the KDF function myself using an off-the-shelf SHA-256 routine (not shown here). So the only black box left (to me, anyway) is the ECDH key agreement phase, but that’s standard too. Plus, the script works with the SE demo code, so I’m confident that everything is working fine.

Again, I’m using this macOS demo application, from GitHub. To use my test script:

Here’s the bare minimum of the test script. A full, commented version can be found in this Gist on Github.

Changes for Variable IV, Other Curves

I mentioned before that this algorithm has been deprecated by Apple. The recommended algorithm is now “kSecKeyAlgorithmECIESEncryptionCofactorVariableIVX963SHA256AESGCM.” To support this algorithm, which derives a unique IV instead of using all zeroes, we only need minor changes:

This rough demo script isn’t set up to handle curves other than Prime256v1. But since the Secure Enclave only supports 256-bit curves, it’s not really an issue. We’d need to inspect the recipient’s public key, and use the same curve for the ephemeral keys. Then, if the curve is larger than 256 bits, we need to derive a larger symmetric key. In the above snippet, change the length from 32 to 48. The encryption key comes from the first 32 bytes, while the IV is the last 16.

So why is all this cool? Because we can be confident that nobody can read our data without our device. Granted, this presumes that the Secure Enclave is, in fact, Secure. We haven’t yet seen any (public) breaks of SE security, but that doesn’t mean it’s impossible. But since it’s so crucial to iOS and now MacBook security, I expect it’s likely pretty good.

What would be even better is if some decrypted items could remain in the Secure Enclave. Consider a system with many layers of encryption keys. The iOS Data Protection hierarchy is a good example of such a system. If you decrypt a group key with the Secure Enclave, then the key gets returned to the application. An attacker may be able to extract that key from the process' memory space. But if that key never leaves the SE, then there’s no risk of it getting leaked through application memory.

Hopefully features like this are in the works for future versions of iOS and macOS. In the meantime, it’s still a very powerful tool, and definitely worth investigating.